“We closed out a very strong fiscal year with fourth quarter results that exceeded all our guidance metrics and again delivered sequential and year-over-year growth,” said Jim Chirico, President and CEO of Avaya. “Our performance throughout the year demonstrates that our investments in innovation and execution of our cloud-first strategy for enterprises have positioned us in the right place, at the right time. We are enabling new ways of work and collaboration that are solving organizations’ most pressing business challenges, and our highly differentiated solutions are driving strong demand across our installed base and attracting new customers." Mr. Chirico added, "As we closed the September quarter, we completed a refinancing that also significantly strengthened our balance sheet and financial flexibility. All of this positions us well for continued success in the new fiscal year.” (1) Non-GAAP revenue, Non-GAAP gross margin, Non-GAAP operating margin, Non-GAAP operating income, adjusted EBITDA and constant currency are not measures calculated in accordance with generally accepted accounting principles in the U.S. (“GAAP”). Adjusted EBITDA margin is calculated based on non-GAAP Revenue. Refer to the "Use of non-GAAP (Adjusted) Financial Measures" below for more information on the calculation of constant currency. Refer to the Supplemental Financial Information accompanying this press release for more information, including a reconciliation of these measures to the most closely comparable measure calculated in accordance with GAAP. Unless otherwise noted, all references in this release to revenue are to GAAP revenue.

* We define TCV as the value of all active ratable contracts that have not been recognized as revenue, including both billed and unbilled backlog.

The company has not quantitatively reconciled its guidance for adjusted EBITDA or non-GAAP Operating income to its most comparable GAAP measure because certain of the reconciling items that impact these metrics including, provision for income taxes, restructuring charges, net of sublease income, advisory fees, acquisition-related costs, change in fair value of warrants and gain (loss) on marketable securities affecting the period, have not occurred, are out of the company’s control, or cannot be reasonably predicted. Accordingly, reconciliations to the nearest GAAP financial measures are not available without unreasonable effort. Please note that the unavailable reconciling items could significantly impact the company’s results.

As Avaya’s CAPS metric reflects revenue that is already recognized, management determined that it could help provide investors with a better view into the performance of the company’s broader-based OneCloud software solutions that are driving the company’s recurring revenue growth by introducing a new forward-looking metric, Annualized Recurring Revenue, or OneCloud ARR.

OneCloud ARR will incorporate different components from the OneCloud portfolio that are configured to suit the operational needs of Avaya’s customers as they transition to cloud-facing recurring revenue consumption models and opex revenue streams. This metric is similar to what our industry peers report and will reflect only the recurring components of Avaya’s OneCloud portfolio which includes multiple deployment options based on customer choice. The introduction of the One Cloud ARR metric, combined with the company’s existing CAPS metric, will provide investors enhanced visibility into Avaya’s transformational Cloud journey. Quarterly and annual OneCloud ARR for fiscal 2020 are provided in the slides published on Avaya’s website at www.avaya.com on the Investor Relations page.

Avaya’s outlook does not include the potential impact of any business combinations, asset acquisitions, divestitures, strategic investments, or other significant transactions that may be completed after November 18, 2020. Actual results may differ materially from Avaya’s outlook as a result of, among other things, the factors described under “Forward-Looking Statements” below.

Avaya will host a live webcast and conference call to discuss its financial results at 8:30 AM Eastern Time on November 18, 2020. To access the live conference call by phone, listeners should dial +1-877-858-7671 in the U.S. or Canada and +1-201-389-0939 for international callers. To join the live webcast, listeners should access the investor page of Avaya's website at https://investors.avaya.com.

Following the live webcast, a replay will be available on the investor page of Avaya's website for a period of one year. A replay of the conference call will be available for one week soon after the call by phone by dialing +1-877-660-6853 in the U.S. or Canada and +1-201-612-7415 for international callers, using the conference access code: 13712455. Use of non-GAAP (Adjusted) Financial Measures

The information furnished in this release includes non-GAAP financial measures that differ from measures calculated in accordance with generally accepted accounting principles in the United States of America (“GAAP”), including financial measures labeled as “non-GAAP” or “adjusted.”

EBITDA is defined as net income (loss) before income taxes, interest expense, interest income and depreciation and amortization. Adjusted EBITDA is EBITDA further adjusted to exclude certain charges and other adjustments described in our SEC filings and the tables below.

We believe that including supplementary information concerning adjusted EBITDA is appropriate because it serves as a basis for determining management and employee compensation and it is used as a basis for calculating covenants in our credit agreements. In addition, we believe adjusted EBITDA provides more comparability between our historical results and results that reflect purchase accounting and our current capital structure. We also present adjusted EBITDA because we believe analysts and investors utilize these measures in analyzing our results. Adjusted EBITDA measures our financial performance based on operational factors that management can impact in the short-term, such as our pricing strategies, volume, costs and expenses of the organization, and it presents our financial performance in a way that can be more easily compared to prior quarters or fiscal years.

EBITDA and adjusted EBITDA have limitations as analytical tools. EBITDA measures do not represent net income (loss) or cash flow from operations as those terms are defined by GAAP and do not necessarily indicate whether cash flows will be sufficient to fund cash needs. Adjusted EBITDA excludes the impact of earnings or charges resulting from matters that we do not consider indicative of our ongoing operations but that still affect our net income. In particular, our formulation of adjusted EBITDA allows adjustment for certain amounts that are included in calculating net income (loss), however, these are expenses that may recur, may vary and are difficult to predict. In addition, these terms are not necessarily comparable to other similarly titled captions of other companies due to the potential inconsistencies in the method of calculation.

We also present the measures non-GAAP revenue, non-GAAP gross margin, non-GAAP operating income, and non-GAAP operating margin as a supplement to our unaudited condensed consolidated financial statements presented in accordance with GAAP. We believe these non-GAAP measures are the most meaningful for period to period comparisons because they exclude the impact of the earnings and charges noted in the applicable tables below that resulted from matters that we consider not to be indicative of our ongoing operations.

The company presents constant currency information to provide a framework to assess how the company’s underlying businesses performance excluding the effect of foreign currency rate fluctuations. To present this information for current and comparative prior period results for entities reporting in currencies other than U.S. dollars, the amounts are converted into U.S. dollars at the exchange rate in effect on the last day of the company’s prior fiscal year (i.e. September 30, 2019).

In addition, we present the liquidity measures of free cash flow. Free cash flow is calculated by subtracting capital expenditures from Net cash provided by operating activities. We believe free cash flow is a measure often used by analysts and investors to compare the cashflow and liquidity of companies in the same industry.

The presentation of these non-GAAP financial measures is not intended to be considered in isolation from, as substitute for, or superior to, the financial information prepared and presented in accordance with GAAP and may be different from the non-GAAP financial measures used by other companies. In addition, these non-GAAP measures have limitations in that they do not reflect all of the amounts associated with the Company’s results of operations as determined in accordance with GAAP. 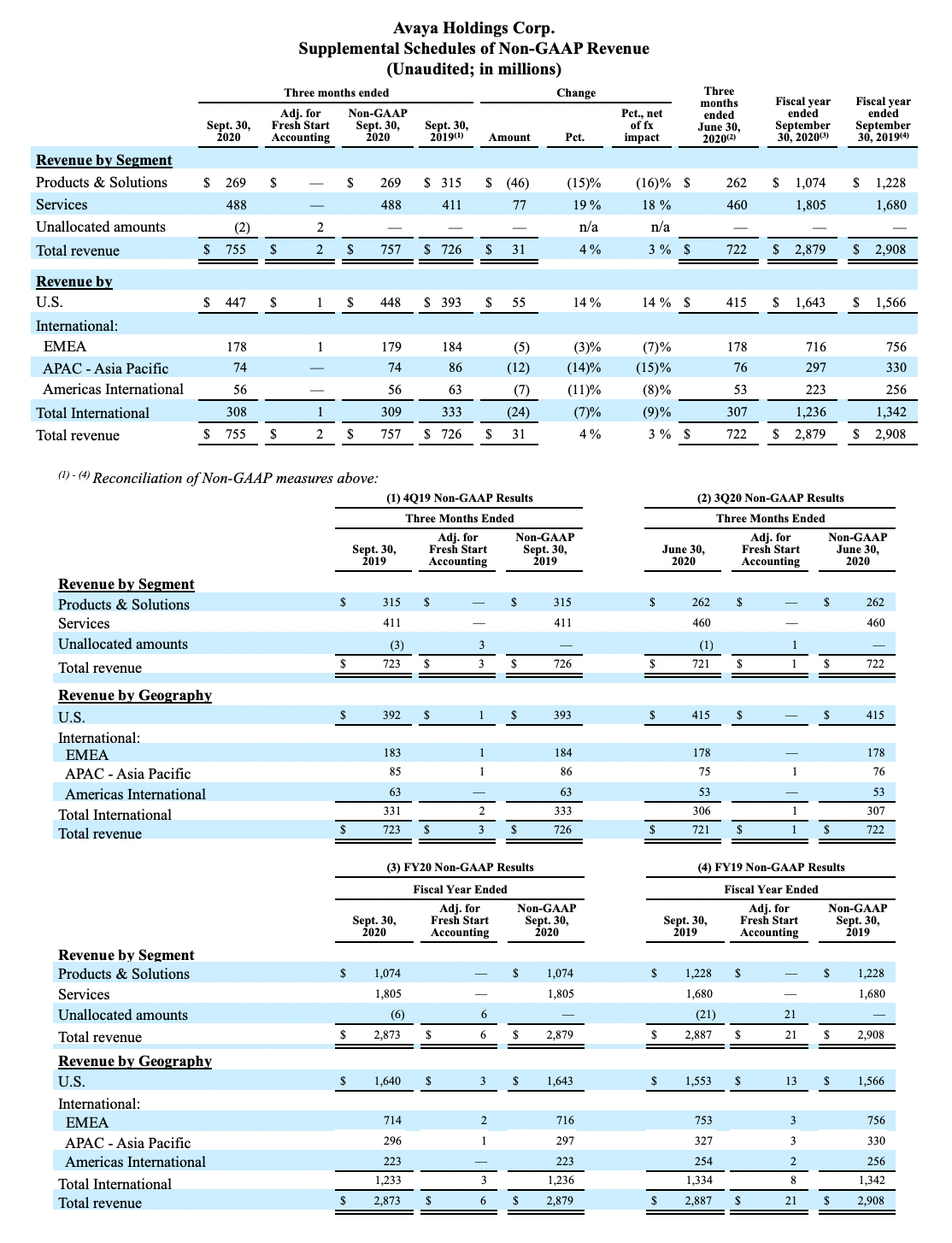 Businesses are built by the experiences they provide, and everyday millions of those experiences are delivered by Avaya Holdings Corp. (NYSE: AVYA). Avaya is shaping what's next for the future of work, with innovation and partnerships that deliver game-changing business benefits. Our cloud communications solutions and multi-cloud application ecosystem power personalized, intelligent, and effortless customer and employee experiences to help achieve strategic ambitions and desired outcomes. Together, we are committed to help grow your business by delivering Experiences that Matter. Learn more at http://www.avaya.com