See how Avaya OneCloud gives you the tools you need to elevate experiences and empowers your employees to resolve inquiries faster and drive customer advocacy.

Contact Center Financial Services
You invest significant resources to build your base of customers. So when a current customer calls with a problem, there's a lot riding on getting the experience right. Avaya OneCloud, the AI powered experience platform gives you the tools you need to do just that. Empowering your people to resolve inquiries faster, and drive customer retention. Here's a demonstration of Avaya OneCloud in action, helping to deliver the right experience to a current customer. Nikki has a Beyond Bank credit card. She loves it, but believes an interest-free promotion on balanced transfers that she was promised when she first took it out, has not been applied correctly. When Nicky reaches the bank, she's greeted by a chat bot. Thank you for calling Beyond Bank. AI based Omni-channel capabilities that are powered by Avaya OneCloud, immediately kick in, encouraging Nicki to use her mobile app. For the fastest and most secure experience, please log into your Beyond Bank Mobile app to authenticate yourself. Nikki authenticates with her voice. She's used to doing that on our app and the information is instantly shared with the chat bot. Using intelligent behavioral, hearing and attributes, Nikki is recognized as a recent and active client, and her conversation is elevated to Tony who originally handled her credit card application. Tony sees the full context of Nicky's interactions, including when he helped her apply for the card, her interaction with the virtual agent, the rule that routed her call, her authentication, and now their current interaction, that's now underway. As Nicky describes her issue, Tony listens, and so does Avaya OneCloud conversational intelligence. Picking out keywords and sentiment. It determines that the call was about interest rates and involves a balance transfer issue. All of this is captured in real time. Tony sees the full transcript. Tony asks Nicki to enter her credit card number via the app that brings up her account. Her account number is redacted and none of her personal information appears on either the transcript or the audio recording. Reviewing Nicky's transactions, Tony quickly determines that her recent transfer was not within the eligibility period. She's not entitled the promotional interest rate. Nikki is not pleased and makes that very clear. Avaya OneCloud picks up on that. All of this is captured in real-time on the transcript. Tony sees all of the intent classification, and scoring that updates every few seconds. In his agent workspace, Tony receives guidance and suggestions on how to handle Nicky's dissatisfaction and de-escalate the situation. Also, rules had been established in Avaya OneCloud for handling these interactions. In this case, the rules sends an alert to Tony's supervisor Jane, to consider authorizing the 0% interest rate on a one time basis. Jane gives the go ahead for Tony to do just that. Needless to say, Nicky is pleased. In fact, when she hangs up, the first thing she does is tweet about how happy she has been with the entire experience. So here's an interaction that started on the phone, involved a chat bot, a mobile app, behavioral pairing, and conversational intelligence made all the information needed to quickly understand the situation available to both Tony and his supervisor and included a rule that provided the authority to quickly resolve the issue. The result, a complaint that might have taken days to research and resolve, is now handled literally in seconds. A relationship that was in jeopardy is now solidified. And by taking full advantage of Avaya OneCloud, the bank didn't just retain a customer. It created a true customer advocate. 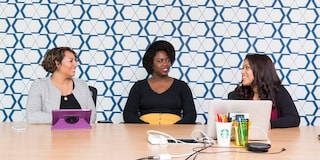 The inspiring ways companies are using Avaya solutions to change the world of work.