Learn common vulnerabilities in enterprise networks today. See how the Avaya Session Border Controller can prevent these types of threats. Protecting your network against security gaps and privacy violations is essential and Avaya makes it easy.

Unified Communications
[00:00:05]
>> With VOIP phones becoming increasingly common, it's now simpler than ever for the hackers to break into networks that haven't been properly secured. In a matter of minutes, a hacker could connect to a hotel's phone system and be able to listen in on calls or gain access to data.

[00:00:21]
If someone is giving a debit card number and password to their bank. A hacker could use them to make fraudulent purchases or run any number of financial scams. A hacker could even intercept an IM chat and gather sensitive information from unsuspecting individuals such as a doctor or financial advisor.

[00:00:39]
Could all this be avoided? Absolutely, let's take a closer look at how an attack works. When this remote worker communicates on an unprotected network, the packets of information he's sending can pass through and be captured by a hackers computer before they reach the enterprise. If that same network were equipped with Avaya session border controller advanced for enterprise, all voice and signaling would be encrypted to the endpoint.

[00:01:04]
This would eliminate any chance of a hacker coming in between communications. Protecting your network against security gaps and privacy violations is essential, and Avaya makes it easy. 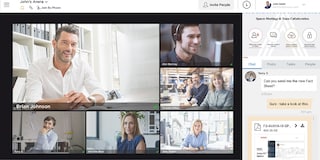 3 Video Conferencing Benefits and Advantages We Fell in Love With